SEPARATED BY BRICKS, MORTAR & WHITE PRIVILEGE: REPORT ON THE CAMPAIGN AGAINST EXHIBIT B IN FRANCE

SEPARATED BY BRICKS, MORTAR & WHITE PRIVILEGE: REPORT ON THE CAMPAIGN AGAINST EXHIBIT B IN FRANCE:

From August to September 2014, black community organisations,  anti-racist organisations, trade unions,  artists and individuals came together to form the Boycott the Human Zoo campaign against the hosting of Exhibit B in London by The Barbican.  The campaign petition, started by activist, Sara Myers, gained over 20,000 signatures but the organisations that formed the campaign represented over a million members.

Exhibit B is an art exhibition by white South African, Brett Bailey. Thirteen installations feature black actors, who are not allowed to speak or move in a re-enactment of human zoos and ethnographics popular during the late 19th and early 20th centuries. There is no narrative on the resistance to colonial rule by black people, no celebration of our achievements or acknowledgment of any other aspect of our histories . The exhibition is insulting, offensive and racist.

The Barbican was reluctant to engage with us and on the opening night of the exhibition we protested outside the venue. The Barbican cancelled the London showing of Exhibit B that evening.  They then issued a statement which sought to demonise protestors describing us as threatening and extreme. http://www.morningstaronline.co.uk/a-2721-When-prejudice,-power-and-privilege-join-forces,-resistance-is-necessary#.VH5PUmeS5EM

At the end of November Exhibit B was hosted by the Theatre Gerard Philip in Saint Denis, a suburb of Paris with a high black population.  As with The Barbican the theatre is a cultural centre where the works of local black artists are seldom seen. In France a petition initiated by historian and lecturer John Mullen has gained over 20,000 signatures and black community groups together with artists and anti-racists have organised a campaign against Exhibit B being hosted in St Denis and in Paris, opening on 7th December.

On the opening night of Exhibit B in Saint Denis hundreds of campaigners protested. They removed the sets of metal barriers in front of the theatre and a window was broken. Protestors spoke with those coming to see Exhibit B and some turned away as a result of the protest and the rest of the evening’s showings were cancelled.

The press demonised the protestors, resorting to personal insults directed at the organisers and the same kind of negative, offensive and nasty comments directed at campaigners in the UK against Exhibit B, branding them as extremists.  One of the campaigners, musician Bams, appeared on a major chat show alongside white sociologists, supporting Exhibit B, who had the audacity to try to tell her, a black woman that she did not understand racism or anti-racism! 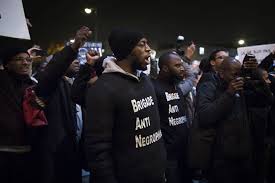 A public debate that was supposed to take in a spectrum of views, including representation from the campaign against Exhibit B, was cancelled, according to the organisers ‘because of the extremist nature of the protestors’.

On the following night two hundred or so protestors were greeted by hundreds of riot police and French armed forces, National Gendarmerie sent to intimidate them. Despite this, protestors stood firm and chanted demanding ‘Respect!’ and ‘Dignity’.  Some went to speak to spectators and engaged in discussions about why they were there. 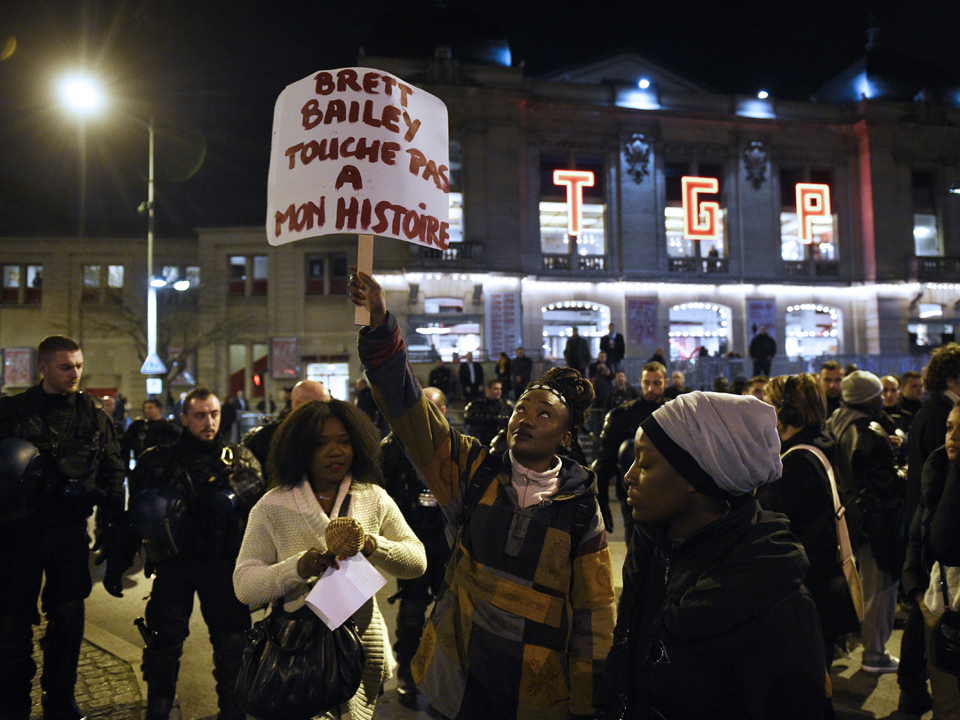 Brett Bailey claims that he and his art are anti-racist yet his response to the abuse and intimidation of protestors in defence of his art was; "My performers are full of fire. My team is full of fire... Rage, rage against the dying of the light. The show will go on,"  It is quite incredible that he can claim to be against racism and to be creating his art to challenge racism but have no concern about the police violence black people are facing as a result of it.
On the third night, the police and armed forces became even more violent using tear gas and clubbing protestors.

It is horrific that black people in France are being brutalised and demonised for standing up against Exhibit B. It is astonishing that any artist would find it acceptable to put on an art exhibition surrounded by armed police in riot gear, barricading the entrance to it,  whilst attempting to terrorise and intimidate black people.

Writing for a South African newspaper, Bailey entitles his piece ‘Blood on the Tarmac’ referring to a protestor he witnessed being brutalised by French police.  He describes watching from the safety of a window inside the Theatre, the security arrangements put in place to try and frighten protestors off.

He says ‘But out there on the floodlit street, beyond the barricades, this is not understood. Those people have not attended the performance. None of this is really about Brett Bailey or EXHIBIT B’.  He claims that protestors have not understood his art because they have not seen it in the same way that board members at The Barbican said that we could not say that Exhibit B was racist because we had not seen it. This is a ridiculous argument, I don’t need to see the BNP attack a black person to know that they are racist and in any case  the Barbican, bar one board member,  had not seen it before deciding to book it.  He then has the arrogance to suggest that the protests are nothing to do with his exhibition but to do with the racism that black people face in society, the same racism they are facing now, demonised, labelled and threatened by police, politicians and the media.  But Bailey does not engage with the black people he purports to care so much about, he does not even appear to recognise the irony of his claiming to produce anti-racist art which is protected by racist police, who attack black people.  Bailey goes on to blame not his art but activists in London for what is happening now.

Brett Bailey looks on protected and separated by bricks, mortar and white privilege, from the living reality of black communities facing deepening racism globally. When asked if he is ‘following’ what is happening in Ferguson, he replies ‘from afar’. It is not possible to distance yourself from racism but at the same time claim to produce anti-racist art.

Protestors here and in France have been accused of censorship of  art, but  we have never called for the work to be censored but for arts institutions to withdraw from hosting it, acknowledging the negative impact on black communities and taking action to address institutional racism in the arts and culture sectors.  Both in the UK and in France campaigners against Exhibit B have included a range of artists.  We are not anti-art but anti –racist.  Rather than being for censorship, we are for equality, humanity, dignity and respect.

Solidarity with sisters and brothers in France standing up to the voyeuristic, racist, demeaning and insulting human zoo.

The exhibition reopens in Paris at the Cent Quatre (104) and runs from 7th to15th December and there will be more protests taking place - please give your support to them.