Amongst the 70 plus well-known personalities who signed an open letter to Secretary of State for Education, Michael Gove  (published in The Times) were several trade union leaders including General Secretaries Mark Serwotka of PCS, Christine Blower of NUT, Mary Bousted of ATL and  Sally Hunt of UCU, the Assistant General Secretary of Unison, Roger McKenzie, former TUC President, Gloria Mills and several members of the TUC Race Relations Committee  together with senior representatives from NUS, PCS, Unite, Unison, CWU, NASUWT and Prospect. 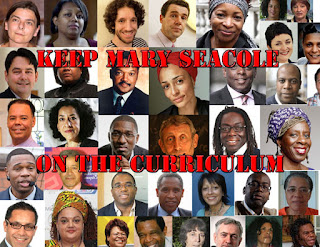 The campaign has been endorsed by the TUC Race Relations Committee who have pledged to donate all proceeds raised at their annual fundraising Dance at the 2013 TUC Black Workers conference to the Mary Seacole Statue Appeal. Planning permission has been given for a bronze statue of Mary in the grounds of St Thomas’s hospital overlooking the Thames but to enable this money needs to be raised.

PCS members in the DfE London and South branch, the government department responsible for the curriculum, have passed a resolution endorsing the campaign to keep Mary Seacole and other black historical figures on the curriculum.

An Early Day Motion in support of the campaign has been signed by 64 MPs and pressure is mounting on Gove to do the right thing with the Deputy Prime Minister, Nick Clegg giving a commitment that Mary Seacole will remain on the curriculum.

I saw a quote recently that said ‘If you don’t know history, you don’t know anything. You are a leaf that doesn’t know it is part of a tree.’
The figures that make up our past are like leaves on a tree. Just as if you were to strip a branch of its leaves, it would be left bare,  if you write historical figures out of the history books there will be blank pages. Leaves come in many shades, shapes and sizes just like the people who make up our history are of different genders, races, backgrounds. Together the leaves ensure the tree is nourished and together a diverse range of historical figures provide nourishment for the mind as well as a true record of what went before.
The Government’s proposal to remove black and women historical figures from the curriculum in favour of what they term more traditional figures is ideological,  like the cuts to jobs, pay, benefits and more that are forcing people into deprivation, they are not based on  logic or aimed at improving lives. Equality is not a priority for the Government which is evident from the cuts to the Equality and Human Rights Commission, their proposals to weaken existing equality legislation and the disproportionate impact that cuts are having on race, gender, disability, age and sexual orientation. If we are selective about the truth we choose to teach the next generation then we begin to teach them a lie and not only will they not draw inspiration from the past they won’t learn from mistakes made either. Carter G Woodson who initiated the idea of a  black history month by establishing a USA negro history week during the month of February in 1926 said; ‘What we need is not a history of selected races or nations, but the history of the world void of national bias, race hate, and religious prejudice.’

It's quite right that the trade union movement have got behind this campaign because fighting discrimination is a trade union issue. Trade unions can continue to support the campaign by circulating the petition to their members, raising wider awareness in their branches, asking members of their parliamentary groups to sign the EDM, inviting a speaker from the campaign to their meetings and events and organising fundraising initiatives for the Mary Seacole Statue Appeal.

To pledge your support for the campaign sign the petition.