We welcome work by Newham Council to green the borough and as part of this work to look at environmental factors contributing to climate change and in taking action to reduce carbon emissions which contribute to global warming. This includes the use of vehicles such as cars.

However we were horrified  to read in a public consultation  document  published on the Newham Council website, a narrative which we consider to be racist in tone and content.

As quoted below, the statement by Newham Council suggests that the diversity of the borough poses a weakness and a problem, in addition to a strength and that the use of cars by black, Asian or migrant communities in the borough is an issue and problem relating to cultural behaviours, effectively othering a huge proportion of the population within the borough.

They say but do not specify that some 'minority communities' in the borough have cars not for practical reasons that the general population may have cars such as getting to work, getting to schools and carers, transporting goods, for work purposes , for example needing a vehicle for your job, disability, as a reasonable adjustment, to cut down on high public transport costs for commuting and many other reasons,  but as a symbol of status. We are not living in the 1920s, having a car is common in Western countries for many and varied reasons and is a part of every day living.

It goes on to describe how a 'specialist approach' is required. Again this is othering and labelling, who ever their words are targeting,  as a problem that has to be tackled rather than approaching matters by seeking to raise awareness of carbon emissions from driving vehicles amongst the whole population of Newham.

The statement then says the Director of Equality for Transport for London will be involved in targeting places of worship and faith leaders. This is of concern on a number of levels including;

As it happens if you were add up all those they might deem to be 'minorities' they make up the majority of the borough's population.

They say they will 'systematically unpick car ownership and it being a symbol of success'.

There is no reference to data or evidence, setting out how they have reached this conclusion, no break down by race or ethnic group of who owns cars, with the reasons for owning them or how /why they drive cars.

To target, demonise and label unspecified ethnic groups who live in the borough is disgusting. If indeed there is found to be a disproportionate use of cars by any particular group then the reasons for this should be thoroughly explored and considered rather than publishing insulting,  negative comments portraying the diverse communities of Newham as uneducated, unaware,  superficial, ignorant, uncaring and irresponsible. Also implying that there are 'good' and 'bad' citizens in the borough when it comes to the environment, divided by race and religion is inappropriate and irresponsible.

Such language and tone  along with the singling out of some, only seeks to divide communities. This kind of othering creates the climate for racism and hate crime to thrive.

It is ironic given  that those most effected  by the impacts of climate change are from the global South, areas of the world where the people or their families historically  that  the council are now  labelling as the worst perpetrators contributing to climate change, are likely to have migrated from. As a result they may still  have family in those countries directly impacted by floods, drought, cyclones, hurricanes etc. The people that the council are now targeting may include some people who came to the UK as refugees,  who were forced to flee the combined impacts of climate change, conflict and poverty. Therefore the so called 'minorities' they refer to may be people who have lived experience and as a result awareness of the importance of addressing climate change and already be involved in campaigning against climate change and promoting a green agenda .

We request that Newham Council withdraw this wording and reconsider their approach, acting in an inclusive way , if they are serious about trying to tackle environmental issues in the borough they need to support, encourage and include people in that work, drawing on the expertise, knowledge  and lived experiences of all its citizens without pointing the figure and othering and labelling any particular group.

"Newham also has its own particular challenges in achieving this aim. The diverse nature of
our Borough population, while being one of our strengths, also presents some cultural issues
about status, betterment and the motor car being seen as a universal symbol of success
amongst some of our minority communities, which will require a specialist approach to
address. We have devised a specific approach to engage with these communities with TfL’s
Equality Director’s help, with initial focus on places of worship and faith leaders in order to
systematically unpick this perceived relationship between car ownership and use and it
being a symbol of success, over time.

(The document has now been removed from the Newham Council website 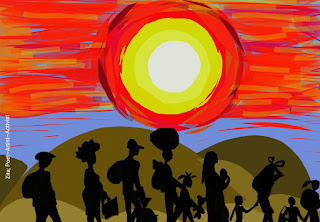