Windrush Day Press Release.
Friday, June 21, 2019
Event Windrush Day: Seven Windrush Justice actions in
seven cities across England and Wales.
Black Groups call for a formal UN investigation into the UK
Windrush Scandal.
London: No 10 Downing Street Protest for 11am followed by
Westminster Bridge, Windrush Justice Banner
Drop. (10m x 5m at around 12 noon)
#WindrushDayOfAction
BAME Lawyers for Justice has organized unprecedented action
in support of demands for justice for the victims of the Windrush
scandal.
On June 22nd will see seven actions taking place in seven cities’,
simultaneously across the England and Wales. These are London. Liverpool.
Birmingham, Nottingham, Derby, Leeds and Manchester
Symbolic actions will be taking place in each of these cities.

2
In London a demonstration will be held outside 10 Downing Street at 11am on
Saturday June 2019, followed by a 10 x 5 meter banner drop, across
Westminster Bridge around 12 noon – 12.15 pm
Today the Black communities of Britain both celebrate their unique
contribution to the making of modern Britain, our cultures of resistance and
rebellion, by demonstrating our opposition to one of the most hostile, racially
targeted British immigration regimes ever seen in modern British history.
Lee Jasper National Co-Coordinator for the WDA
This Governmental immigration regime is the most virulently racially hostile
immigration regime in modern British history, Today’s Windrush celebration is
marred by the fact that tens o thousands of black people remain affected.
Despite the apologies of Government, black people continue to be wrongly
denied rightful citizenship by a Home Office that is incapable of seeing past
peoples color . British black people, and the wider community remain
outraged. Whilst Brexit has dominated the political and news agenda, the
victims of Windrush have been forgotten.
We intend to place these matters at the highest level; we call for a formal UN
investigation into the Windrush scandal and the rancid racism that makes
Britain one of the most overtly racist nations in the world, in terms of
immigration policies.
Make no mistake British immigration policy is in reality a covert policy of
forced repatriation, the most coveted policy of the extreme racist right wing for
decades.
Today, Black British citizens now face a routine, implicitly racist administrative
culture that operates on the basis of automatic presumption of disbelief,
regardless of objective evidence available.
This institutionally racist culture is shared across the administration of
Government, including immigration, police, judges and schools officials,
Routinely disbelieved, routinely facing discrimination, that is the Black British
experience. The credibility of Black British citizenship can be summed up in
one sentence, “You’re a liar we don’t believe you.”


Pastor Clive Foster Is Senior Pastor from the Pilgrim Church which has
been supporting hundreds of people since the scandal broke said;
“ As part of the National Windrush Day of Action organised by BAME Lawyers
for Justice, Nottingham will be joining other cities across the UK standing in
solidarity with the victims and families of the Windrush Scandal. All are invited
to meet in the city centre at the Brian Clough statue to hear passionate
speeches from campaigners, activists and diverse Windrush supporters.


3
As with other cities there will be the unfurling of the Nottinghamshire
Windrush Day of Action banner to highlight the on-going plight of people still
seeking justice as a result of the governments hostile environment
policy. Along with speeches the event will also include contributions from
local poets, gospel singing and drumming as part of the day.
‘It’s great to mark the first official Windrush Day in the UK with Nottingham
joining a coordinated effort to stand up for the rights and justice of the
Windrush Generation - today is a telling reminder that injustice anywhere is a
threat to justice everywhere and we need to continue ensure that the dignity
and worth of British citizens is preserved’.
The meeting will take place on Saturday 22nd June at 1.00pm at the Brian
Clough statue, speakers corner city centre – all welcome”
.
Kingsley Abrahams General Secretary of Momentum Black Caucus
stated:
“ This reprehensible Tory Government should be dragged to the International
Human Rights implementing the most egregious acts of state endorsed
racism, resulting in the most profound of racist human rights violations that
we've seen in a generation. We fully support this national day of action and I
determine
to support the campaign for justice and restitution for Windrush victims and
their families.”
Cllr Anna Rothery of Liverpool City Council and Mayoral Lead for
Equalities stated:
“We in Liverpool we will be supporting the Windrush Day Of Action and in
addition to action on the 22nd, there will also be Windrush events running from
the 26th screening black flowers reclaiming white spaces, Betrayal the
Charles Wotton story & Small Island on the 27t
June.
There will be a community day for youth and elders with various speakers,
stalls spoken word with Levi Tafari, Akala, and the African Heritage Company
will be looking at a sense of self a sense of place a project looking at the
managed decline of black community organisations such as the Charles
Wooton education Centre, MIAU Merseyside immigration advisory unit, L8
Law Centre, Access to Law and African studies and how the lack of resources
impact on our youths consciousness.
28th a commissioned play looking at the insanity of the” hostile environment”
exploring the story of a Jamaican nurse who has been nominated for a life
time achievement award at the same time as receiving deportation papers!
Followed by a panel discussion with Sir Geoff Palmer Glasgow University
amongst other guests
This gives a platform to unpick the Windrush debacle and utilise our black
creative talents to send a clear message, all of these activities will be curated 4
and captured in a Windrush Legacy book which will be of the official record of
part of Liverpool’s fight for Windrush Justice.
Zita Holbourne, National Chair BARAC UK, National Vice President
PCS Union, Joint National Chair, Artists Union England commentated…
“The treatment of the Windrush generation, their multi generation families and
people from other Commonwealth countries is an absolute disgrace. The
pain, misery, distress , discrimination and injustice experienced and let's be
clear still happening is inhumane.
The government simply celebrating the achievements of the Windrush
generation on 22nd June without addressing the injustice and properly
compensating people is simply wrong. We have organised a day of action to
send a clear message to the government, that we are here, we will not be
silent and we will continue to fight for our rights
Prof Cecile Yvonne Wright of Derby East Midlands stated,
"We in Derby are fully in support of the Windrush Day of action and we will
work day and night to ensure that the victims of Windrush scandal received
the justice, reparation and compensation they deserve."
Contacts;
National and London
Zita Holbourne Tel 07711861660
Lee Jasper Tel 07984181797
Kingsley Abrahams Tel 07932 447763
Regions:
Anthony Brown Tel 07392399040 (Manchester)
Claude Hendrickson Tel 07831 480196 (Leeds)
Cllr Anna Rothery Tel 07841 652168 (Liverpool)
Phil Murphy Tel 07866 531494 (Birmingham)
Prof Cecil Wright Tel 07504 510710 (Derby)
Pastor Clive Foster Tel 07881656399 (Nottingham)
Editors Info:
BAME Lawyer 4 Justice is a national coalitional of lawyers and campaigning
group challenging Windrush injustices and the Government immigration
“hostile environment” policy
We is an umbrella platform comprising of Society of Black Lawyers, BARAC
UK, Blaksox, Windrush Action & a number of Windrush campaign groups from
across the UK.


5
We campaign in response to the unfolding Windrush scandal calling for all
deportations, including charter flights to the Caribbean, to be stopped.
We held an online windows debate and two national conferences, one in
London and one in Nottingham in 2018. These community consultation events
have called for a Windrush Day of Action
We organised and made countless representations to the Home Office on this
issue, all ignored and have recently launched a petition calling for the
cessation of all deportation charter flights, and now signed by 12000 people.
We held a Windrush Parliamentary Round Table, chaired by Diane Abbott MP
in June 2019 that was a huge success and was massively over subscribed 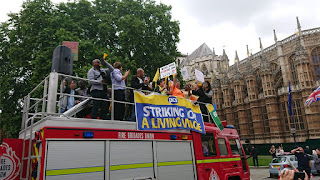 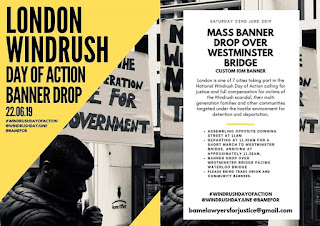