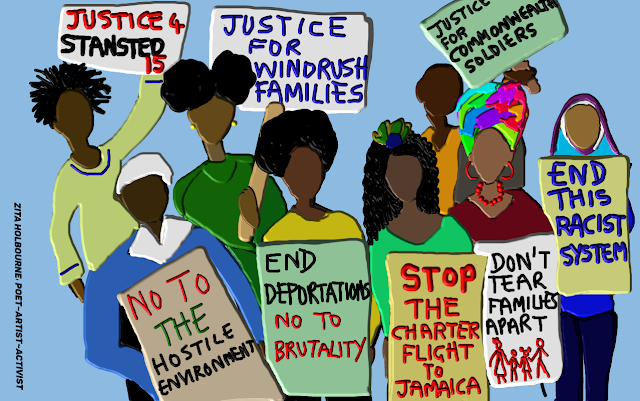 It is the London event linked to several events in different UK cities as part of the National  Windrush Day of Action called by a group  of Windrush campaign groups under the umbrella of BAME Lawyers for Justice agreed at our national conference in Nottingham  last November. We have chosen the 23rd of February because it is the nearest Saturday to the United Nations Day for world social justice.

We will hear from speakers directly impacted by the Windrush scandal and from those campaigning to challenge this injustice.

Last year the government stopped all charter flights to Jamaica because of the Windrush scandal but  have organised one for February which is an absolute disgrace and premature given that the Windrush scandal and related injustices are still continuing and the government gave not yet published the outcome of the compensation scheme consultation and that the Home Office lessons learned initiative is still ongoing.

More to be confirmed
Posted by Zita Holbourne, Poet~Artist~Activist at 01:41