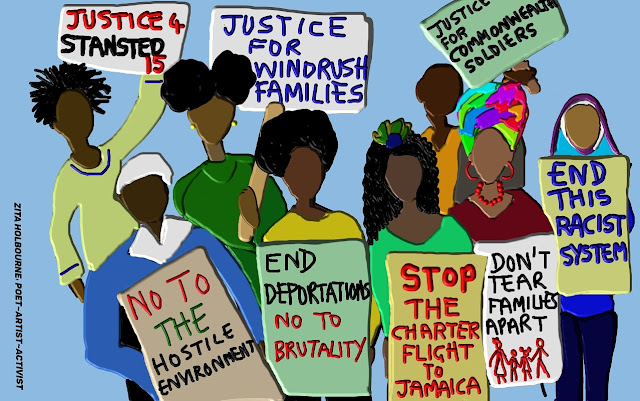 
BAME Lawyers for Justice is a group coalition campaign challenging Windrush injustices and the Government hostile environment. We are an umbrella platform comprising of Society of Black Lawyers, BARAC UK, Blaksox, Windrush Action & a number of Windrush campaign groups across the UK.
We campaigned in response to the unfolding Windrush scandal calling for all deportations, including charter flights to the Caribbean, to be stopped. We advocated, organised and made representations to the Home Office and launched an online petition signed by 10000 people.


As a result of this, alongside the work of many activist organisations, the planned charter flight to Jamaica in the spring of 2018 was cancelled. Charter flights to Jamaica, but not other countries, were suspended.


We condemn the resumption of deportation charter flights to Jamaica. A flight left the UK bound to Jamaica today. We are shocked and appalled at this action, particularly as the government, has not received , nor has the public been informed, about the conclusions of the many Windrush ‘Lessons Learned’ reviews. The resumption of these deportation flights is a grievous, appalling insult to the principles of justice and fairness.


Yesterday the Home Secretary may have misled the House, when he said in response to Parliamentary Questions, that all of the 50 people planned to be deported were ‘serious criminals'.


We understand that at least 15 people were prevented from being deported, by the actions of their lawyers, supported by campaign groups. So that’s at least 15 people who may not have fitted the Home Secretary’s description. We are delighted that with your support we were able to get former British Army soldier Twane Morgan, taken of the plane in a last minute legal action.


The Home Office approach to fundamental rights of returnees has been cynical and inhumane.


We commend Twane’s legal representatives, Shivani Jegarajah, of Justitia Chambers and Rachel Okello of Rogols Solicitors both who represented, supported by a campaign team, recognising the importance of the principle of access to justice for everyone including those deemed to be foreign nationals.  Mrs Justice May granted the injunction and he was taken off the plane.

We have no confidence in the ability of the UK Border Agency to treat people fairly and in accordance with the law. We don’t believe that the public would support deportation in many of these cases, were the details of their individual circumstances known.
We call upon the British government, to stop all deportations, until such time as the lessons from Windrush can be properly learned, systems reformed, and equality of all citizens before the law can be equally guaranteed, without regard to race.


We full support the Stansted 15 who are in court today after protesting a deportation flight in  2017 and we note the extraordinary escalation of their charges by the Crown Prosecution Service. If these flights continue, we may see many more such protests.


Quotes from the group:


“It is irresponsible and inhumane to conduct wholesale deportations of people, tearing them from families & demonising and labelling them.
I have been leading the campaign for justice for Twane, who has literally been used by the British government & then neglected & discarded . It has been a rollercoaster 24 hours, a high court injunction granted last eve, only to be contacted by Twane in the early hours of this morning with the news that he is being transported to the airport & being deported. Twane was put on the plane, cuffed to two security guards and only just removed from the flight just before take off. "


“This was emotional torture for Twane & his loved ones and totally unnecessary. Until there is a concluded independent public inquiry, this scandalous inhumane treatment of people must stop.”


“The Windrush scandal is a matter of utter national shame and disgrace. That Her Majesty's Government would embark on a campaign that targeted Black British citizens with the illegal forced detention and removal, is not only reprehensible, but strikes at the heart of concepts of justice, fairness and equality before the law. This Government has unilaterally cancelled the social contract between the state and British black communities and the consequences are devastating. Peoples lives are being destroyed and yet the Government seems intent to ride rough shod over the rights of these deportees. This is an outrageous calumny, a barbarous and inhumane  example of institutionalised racism in practice."


“For the Government to willingly persist in these deportations, using an immigration deportation regime, proven to be institutionally racist to its core, constitutes both malign intent and hostile provocation.”


“These deportation charters are of grave concern. They are shrouded in secrecy and there is no adequate mechanism for ensuring that people on them have access to quality and independent advice.


To date we do not have accurate information about who was on this one and there is no evidence to support the Home Secretary's claim that it was full of very serious criminals, notwithstanding  the fact that in many cases we're talking about people who are settled in the UK and already punished for any crimes.


“Further, the very process of shackling 50 plus people, including with hand and sometimes waist restraints with each person accompanied by several guards on a 9 hour flight is dehumanizing and tantamount to torture with lifelong debilitating consequences.  There must now be an urgent review of the legality of this process and of the policies and laws which make this possible.”


We will be holding action-planning events in various cities, across England, in preparation for our Windrush National Day of Action, to take later in the year.


Planning meetings will take place simultaneously, on the 23rd February and are supported by Windrush campaign groups under the umbrella of BAME Lawyers for Justice and planned to mark United Nations World Social Justice Day.

We call on the country to do the right thing, join us and our campaign for justice and support our call for an Independent Public Inquiry into the Windrush scandal.


Petition: Conduct an Independent Public Inquiry into the Windrush Scandal