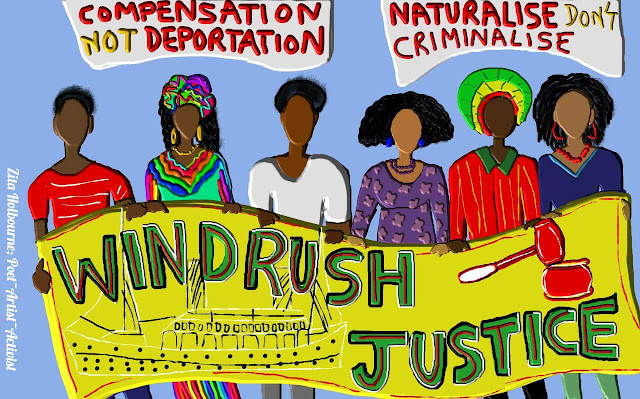 I started a petition on Monday night calling on British Airways to stop working with the Home Office, deporting people. Last week it was revealed by The Guardian that Virgin has declared it is no longer collaborating with the government to deport people.  I am quoted in the article.

In just 36 hours since launching this petition in has gained 27000 signatures. People are quite rightly outraged by the treatment of Windrush generation people and their families who have made their lives in the UK, working & contributing taxes for decades,after raising children & grandchildren.

I also have a related petition focused on the Home Office. If you read the updates you will see that the Home Office have failed to comply with 2 separate Freedom of Information requests and I have had to report them to the Information Commissioners Office.

Virgin Airlines have announced that they will no longer work with the Home Office to deport immigrants from the UK amidst concerns the Home Office is wrongfully removing members of the Windrush generation and LGBT asylum seekers.People deemed as illegal immigrants are detained and removed using these flights - sometimes this whole process happens in as little as 2 weeks. This leaves very little time to get legal support and to appeal the Home Office’s decision. As a result people who actually have the right to be in the UK, are at risk of being deported - and disgracefully they have been.
Last month, the Home Secretary admitted that at least 63 people were wrongly deported from the UK who were part of the Windrush generation.These are people who were invited and immigrated to the UK legally, built their lives and made their homes here and then were forced to leave.
The decision by Virgin to stop participating in this is a big step in helping to save people facing such injustice. I hope that if other airlines follow Virgin’s example, it could encourage the Home Office to make the system better and fairer.
That’s why I’m calling on the UK’s largest airline, British Airways (BA) and other airlines, to commit to not helping to deport people too.Three major US airlines - American Airlines, United and Frontier - asked the federal government to stop using their flights to transport migrant children who have been separated from their families before Donald Trump signed an executive order to end separations. I want to see UK airlines taking as strong a stance, and standing up for what is right.As the National Chair of BARAC UK - Black Activists Rising Against Cuts - we work regularly with  people who are targeted by the Home Office including those from the Windrush generation and so I see the damage it causes to their lives and the communities they are part of when they are torn away. The tide is turning. Corporations are learning that it is important to listen to the public and recognise the role they play.Please sign my petition.