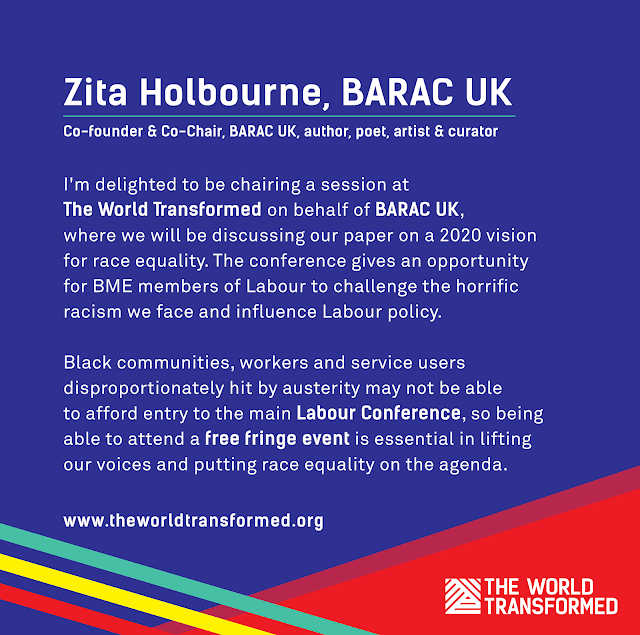 "On Monday I spoke with Jeremy Corbyn at the London BAME rally in Highbury Fields. I was glad and reassured to hear Jeremy speak about his commitment if he is re-elected as leader to challenging the systemic racism in the UK which is causing deprivation & devastation to black communities, amplified by austerity & deepened post-Brexit.

I'm delighted to be chairing a session at The World Transformed on behalf of BARAC UK, where we will be discussing our paper on a 2020 vision for race equality. The conference gives an opportunity for BME members of Labour to challenge the horrific racism we face and influence Labour policy. Black communities, workers and service users disproportionately hit by austerity may not be able to afford entry to the main Labour Conference, so being able to attend a free fringe event is essential in lifting our voices and putting race equality on the agenda.

Black people are discriminated in all aspects of society - institutional racism has deepened. Last week yet another black man Dalian Atkinson was killed at the hands of the police, making him the 157th black person to die in this way since 1990. There has not been a single successful prosecution of a police officer to date. Young black people are up to 32 times likely to be stopped & searched than their white counterparts.

BARAC UK was invited to lead the session because we are a grassroots organisation with a track record of campaigning against all forms of racism & it's essential that those at the forefront of struggle are leading such sessions. We welcome and look forward to participating in what should be an inclusive event accessible to all. #BlackLivesmatter "

Affirming our support for Jeremy Corbyn and John McDonnell

Statement of Support for Jeremy Corbyn and John McDonnell; United Black Labour
We the undersigned affirm our support, solidarity and congratulations to Jeremy Corbyn and John McDonnell for their strong and long record in standing up to all forms of racism and injustice.
Both Jeremy and John have a long history of campaigning and making a stand against all forms of discrimination, Islamophobia, anti-semitism, xenophobia and fascism and for standing up for equality, justice, freedom and peace, not just in the UK, but globally.

We call on everybody eligible to vote in the Labour Leadership contest to vote for Jeremy Corbyn.