STRANGE KIND OF JUSTICE, A POEM WRITTEN BY ZITA HOLBOURNE, CO-CHAIR OF BARAC 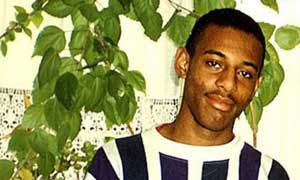 Doreen and Neville Lawrence have spent 18 years fighting and campaigning tirelessly for justice for their son, Stephen Lawrence, a bright and beautiful young man who was murdered by a racist gang. Partial justice has been served with two of his killers convicted of murder but not all of them and not sentenced for long enough and this would not have happened if the Lawrence family had not been persistent and determined to see the killers of their son punished for their crime. I wrote this poem in response and commend the Lawrence family for their strength and inspiration.

Where only some of the guilty get the punishment they deserve

That can allow killers to grow freely into adulthood

Yet deprive that of the bright, beautiful young man they brutally took

That supports a judicial system that’s rotten to the core

That regards some lives as cheaper and more inferior than others

And allows the innocent to live in anguish and suffer

That allows the injustice of murder and prejudice to thrive

And keeps the ignorance of discrimination alive

That looks on with disinterest whilst families fight for a lifetime

Whilst the guilty unremorseful and defiant are given a lifeline

That offers a distorted, biased imbalance of scales

Tilted to keep murders and racists away from the jails

That sees a police force cast aside facts and evidence

Disregarding human rights along with reason and sense

That requires wealth and power in order to be accessed

That shuts its doors on the least empowered and the poorest