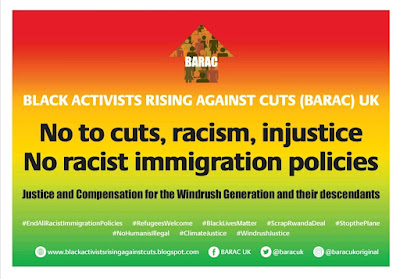 BARAC UK is part of the Action Against Detention and Deportations group. We have organised solidarity protests at detention centres over the coming days and weeks.

Hundreds are expected to attend the demonstrations at immigration removal centres (IRCs) across the UK to show solidarity with people in detention threatened with removal to Rwanda. The demonstrations will take place on the weekends before and after the High Court judicial review hearing on the Rwanda policy, which begins on 5th September.

The demonstrations are being organised by Action Against Detention and Deportations, a coalition of groups and individuals, committed to ending the “inherently unjust practices” of detention and deportation, and dismantling the wider “hostile environment” against migrants [1].

The coalition, which includes groups such as All African Women’s Group, BARAC UK, Global Justice Now, and SOAS Detainee Support, has decades of collective experience campaigning against detention and deportation and for refugee and migrant rights. They state the Rwanda policy is a “racist, punitive, and illegal move by the Conservative government” [1]. They believe that alongside ongoing legal proceedings, public opposition is urgent and crucial in light of reports that new Rwanda removal notices are being handed out and that the Home Office is planning another flight [2].

Demonstrators, including women asylum seekers at risk of being detained and removed to Rwanda, will describe their experiences and express their outrage at the policy [3], which targets women and men seeking sanctuary from persecution, conflict, rape and other life-threatening situations, including climate displacement.

The government’s attempt at an initial flight to Rwanda on 14th June was grounded after widespread protest, condemnation, and an eventual injunction from the European Court of Human Rights [4]. Those forced onto the plane were treated with appalling brutality. Surrounded by security escorts, they were handcuffed, restrained, and utterly terrified [5]. Demonstrators will demand that this traumatic process never happens again. Further protests took place at seven detention sites across the UK in July after rumours emerged of a planned second flight [6].

A detainee who has been given removal notice to Rwanda* said: “They tell me I must go to Rwanda. Believe me, if I thought Rwanda was a safe option I would have gone there. And if I thought I would be safe in my country I would go back there in an instant.”

Gloria Peters, a member of All African Women’s Group, said: “As African women, we know that Rwanda isn't safe. The genocide has left an indelible mark. Many of us are survivors of rape and other torture and our lives will be at risk there. Our countries have been bombed, our lands and homes destroyed, our wealth stolen. We have a right to be here.”

Zita Holbourne, National Chair of Black Activists Rising Against Cuts (BARAC) UK, said: "This vile policy of targeting vulnerable people who have already had to flee for their lives and dumping them in Rwanda is inhumane and breaches international human rights laws. It is also racist in intent, targeting Black and Brown people, who have found themselves with no other choice but to arrive in the UK by small boats, already experiencing post traumatic stress because of the reason they had to flee and the perilous journeys they have encountered. We have a collective responsibility to resist and stand up against such systemic racism and injustice."

Joseph Maggs, Coordinator of SOAS Detainee Support (SDS), said: “The Rwanda plan is the British state’s latest attempt to dehumanise and marginalise people who have fled persecution, war, poverty, climate catastrophe and other forms of life-threatening violence. Seeking sanctuary and a better life, the government wants to permanently expel them to a country they have never been to. This policy is a violent attack on the asylum system, an expansion of the Hostile Environment, and aims to stoke divisions in a deeply unequal society. Despite ongoing legal proceedings, the Home Office is reported to be planning another Rwanda flight. We stand with our migrant brothers and sisters and will not allow anyone to be deported under this brutal plan, which is rooted in Britain's ongoing history of racism and colonialism."

Zrinka Bralo, Chief Executive Director of Migrants Organise, said: “We have had enough. The Rwanda sham is the latest cruel expansion of Britain’s Hostile Environment immigration system. It undermines the most basic principles of refugee protection. This year marks ten years since the Hostile Environment was embedded into policy, building on a colonial legacy of state racism to criminalise migrants and deny us our dignity and freedom. But the state’s legacy of violence is matched by our legacy of resistance. We know that when we take action together, a better world is possible. We need every person who believes in dignity and justice to take solidarity action now - there can be no bystanders in the face of this cruel, inhuman and shameful Rwanda sham.”

[5] May Bulman and Bel Trew, “‘Like I was going to be executed’: On board the failed Rwanda deportation flight”, Independent, 16 June 2022.

*Name has not been given to protect identity

ABOUT ACTION AGAINST DETENTION AND DEPORTATIONS

Action Against Detention and Deportations is a coalition of groups and individuals committed to ending detention, deportations and the wider “hostile environment” against migrants. Our members stand in solidarity with people seeking sanctuary in the UK, and some are at risk of being removed to Rwanda themselves. Members of our coalition have decades of collective experience campaigning against detention and deportation and for refugee and migrant rights.

The groups involved are: