Please use and feel free to adapt the model letter below and send urgently to your MP asking them to take action to stop the mass deportation flight to Jamaica scheduled for 18th of May 2022.

If you do not know how to contact your MP or who they are, use this link .

You just need your postcode to hand.

We are using the hashtags #Jamaica50 and #StopthePlane

I am writing as a constituent to ask that you urgently oppose the mass deportation by charter flight to Jamaica, scheduled by the Home Office on 18th of May. Mass deportation flights are a breach of human rights. There is evidence that the Caribbean community has been targeted disproportionately for deportations in addition to the horrific impacts of the Windrush scandal.

Amongst those targeted for deportation on these flights are young people who have been victims of modern day slavery, people who have made their home in the UK for decades, , who came to the UK as children, who are parents of British born and young children, who came to the country as refugees, including people who have had to flee persecution. Most are the children and grandchildren of the Windrush Generation and they are their families have contributed to the UK economy and wider society over many decades. Invited here to help the UK recover post World War II.

Over the past two years there have been outbreaks of coronavirus in detention centres in and those detained have reported a woeful and unacceptable lack of PPE and wider safety measures. People being deported are transported in packed vans, often handcuffed to escorts, on long journeys to airports, where they then are chained to their seats and to two guards. Given that black and minority ethnic people have contracted and died of covid disproportionately, this is irresponsible to put people who are at high risk already, in this position. This has included people with serious medical conditions.

In addition, the vast majority have British children, partners and wider family here. Tearing parents apart from loved ones including children is inhumane and causes distress and trauma to children and is unlawful, breaching the human rights of children and families.

The fast turnaround of deportations leaves inadequate time to access legal advice and representation which has been made worse because access to the computer rooms at detention centres have been closed or with limited and restricted access. There have also been reports of fax machines and computers not working meaning that people detained cannot communicate with legal representatives. Access to legal support is a fundamental human right.

Once deported, people face destitution, trauma and persecution, with some having fled persecution in the first place, this impacts severely on both physical and mental health. We know that some people have sadly been killed or taken their own lives subsequently.

I am asking that you take urgent action, including writing to the Home Secretary calling for this flight to be cancelled and to call for an end to charter flight mass deportations.

Please add your full postal address to confirm you are a constituent. 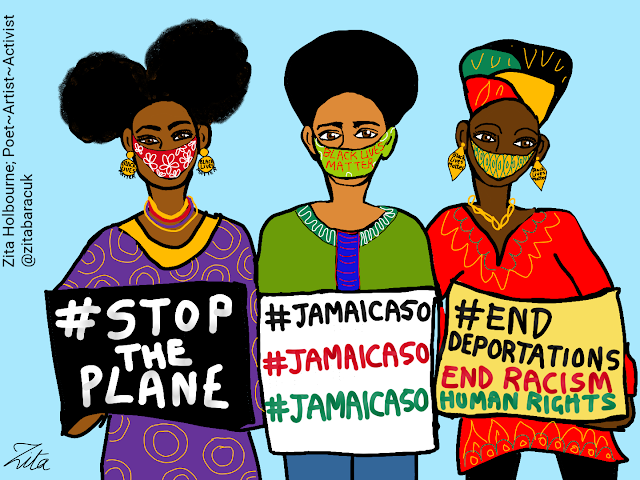