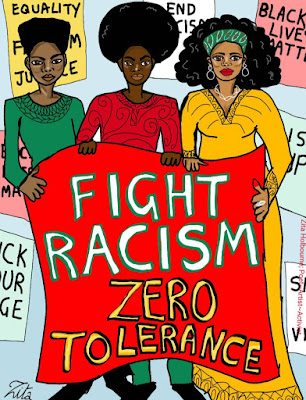 BARAC UK is deeply concerned by the tone and content of this report, published on 31st March.  https://www.gov.uk/government/publications/the-report-of-the-commission-on-race-and-ethnic-disparities

It seeks to reduce the very real and devastating lived experience of racism by racialised groups of people living in the UK.

It also seeks to divide Black and ethnic minority communities into 'good' and 'bad' migrants and suggests that those of us who campaign against racism are stuck in the past or that we are imagining it.  Effectively gaslighting people who experience racism.

To suggest that racism is in the past, ignores the impacts of over a decade of austerity with disproportionate impacts on employment and service provision, the Grenfell Tower fire, the Windrush scandal, the treatment of people who are displaced and are refugees, the disproportionate rate of contracting and dying of coronavirus, to name but a few recent and current events, still impacting now.

The report barely mentions the Windrush Scandal or the Grenfell fire.

An extract of the report states:

"However, we have argued for the use of the term ‘institutional racism’ to be applied only when deep-seated racism can be proven on a systemic level and not be used as a general catch-all phrase for any micro aggression, witting or unwitting."

Following the inquiry into the racist murder of Stephen Lawrence, the McPherson report in 1999 defined institutional racism as:

"The collective failure of an organisation to provide an appropriate and professional service to people because of their colour, culture or ethnic origin."

A number of review reports ten and twenty years on, found that the original 70 recommendations had not been implemented and institutional racism still exists. The race report suggests that the McPherson report was limited to policing only but it raised concerns about a range of public bodies.

The report attempts to reduce racist hate crime as 'individual instances' as though they don’t count and don’t have an impact and to state that our success as racialised people should be "regarded as a model for other White-majority countries", playing down racist hate crime and suggesting that if people succeed in 'education' and 'the economy' this makes the UK a shining example of positive race relations irrespective of the lived experiences of racism and their devastating impacts.

The race report refers to some previous reports on racism but does not mention the Windrush Lessons Learned report or the Joint Committee on Human Rights report which last Autumn stated as we have been saying, that all the recommendations from the previous reports needed to be implemented.

We did not need yet another report, but for action to be taken to address racism in all its forms without arguments put forward to reduce and disregard some forms of racism over others. All racism is wrong and all racism has devastating impacts on lives, life chances and future generations.

Recommendation one includes investing in the EHRC. The EHRC was subjected to funding cuts by the government, which not only impacted on its ability to carry out enforcement work but also led to disproportionate numbers of Black and Asian staff losing their jobs at the EHRC.

In 2017 Lord Herman Ouseley, Lord Simon Woolley and I were part of a delegation that met with the EHRC about this, read more here;

Recommendations call for partnerships with the police and for improved training for police to interact with communities but nothing about addressing institutional racism in policing and  police brutality. Just look at the recent case of missing student Richard Okorogheye, at the time of writing this, I am so devastated for his family that a body which matches his description has been found (but not formally identified yet). Richard's mother Evidence Joel told the press that the police told her when she reported him missing:

At the start of this year Mohammud Mohammed Hassan was taken into police custody overnight in Wales. By the next day he was dead.

Black, Asian and minority ethnic people face discrimination in the labour market, in recruitment, appraisal, promotion, progression and pay but the report recommends:

"the use of sponsorship to ensure wider exposure of ethnic minority individuals to their peers, managers and other decision makers".

It speaks of fairness needed at work but not equality.

On the race pay gap it recommends;

But no recommendations on closing the race pay gap.

There is specific  law on the gender pay act so why not on the race pay gap.

The report suggests that Black Lives Matter protests in the UK in 2020, which is what led to the Commission's establishment, were solely concerned with the horrific murder of George Floyd and racism in the USA. This is not true at all. The protests were calling for justice for George Floyd but also about the racism which exists in the UK including the legacies of enslavement of African people and colonialism which exist today not just in statues and symbols but also policies and practices.

The report is condescending towards young people and insults their intelligence, gaslighting them also.  In fact, the report seeks to make light of the 'transatlantic slave trade’ or worse still glorifying it as they say:

They also describe calls to decolonise the curriculum as negative.  They say they want children to 'reclaim their British heritage' but don’t seem to understand the importance of history being taught truthfully and the experiences and achievements of black and brown people in history being included in the curriculum.

As somebody who has campaigned for black history to be on the curriculum including as part of the Mary Seacole Curriculum Campaign, I do not agree, Black, Asian and minority ethnic children have the right to learn about the histories  and heritage of their parents and ancestors too:

Also, in my role as part of the UNESCO Coalition of Artists for the General History of Africa, I promote the 8 volumes of the history of Africa in my work in the arts, the UN recognises the benefits of decolonisation and promoting African history as a way of countering the racism faced by young black people of the African diaspora.

“The Coalition aims to mobilize and raise awareness of the African youth and diaspora around a number of central themes related to the General History of Africa (valuing African contributions to contemporary societies, promoting a pan-African identity, “decolonizing” minds, celebrating African diasporas.”

I reject these ideas in the report about history and heritage. It’s crucial for  children to learn about all their roots and heritage , it helps to break down barriers and to instil value and worth.

Bizarrely the report references the ceremony for the opening of the Olympic games in London as demonstrating progress on race because there were black people featured but fails to  mention that the Olympic games were held in one of the UK's most deprived boroughs and one with the highest ethnic minority population, that many black and minority ethnic communities were displaced because of the Olympics , losing homes and businesses and that the promises of the games benefitting the local community  never materialised. The London borough of Newham is the local authority with   the highest rate of covid deaths which is caused by poverty, overcrowded housing, precarious work and disadvantage.

In fact, as the Olympic games opened in Stratford, BARAC UK was also in Stratford, launching an initiative to address race discrimination at a meeting entitled; Jobs and Justice, Olympics Fair Play for Who?

In addition, I led a successful campaign against racism by the British Olympics Association, when Britain's biggest black newspaper The Voice was denied 1 single media pass whilst the BBC had over 100. Whilst we won the campaign,  it should not have been necessary. It ought to have been obvious to even the all white BOA committee that black press would have an interest in the Olympic games, I cannot believe they had missed the significant presence of black athletes at the Olympics.

The report states that instead of focusing on race and ethnicity we need to look at underlying socio-economic issues, but fails to acknowledge that it is due to institutional and structural racism, that those disproportionate impacts linked to socio economic factors, exist.

The report suggests strangely that if we refer to institutional, structural or systemic racism we are trivialising racism. In the same way we may describe, direct and indirect racism and racist harassment and bullying, it is correct that we refer to the other types of racism which exist. It is wrong to say that we are the ones creating a 'problem' by doing so.

In addition, the report has misrepresented the meanings of white privilege and white fragility all together. It seems to suggest that success cancels out discrimination and that they are mutually exclusive.

BARAC UK rejects this report, it seeks to divide communities, trivialise and disregard some forms of racism,  gaslights those who experience racism and plays into the hands of those who hold racist views, setting us back not taking us forward.

This statement was published in the Morning Star newspaper on Thursday 8th of April.  Read Here

On behalf of BARAC UK