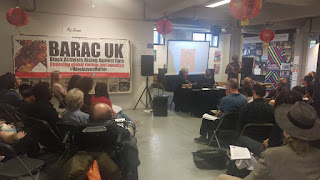 BARAC UK held a brilliant packed out session at The World Transformed 2016 on Sunday.

The session, entitled 'Building Black Power -Black Lives Matter', was chaired by BARAC UK Joint Chair, Zita Holbourne, who opened the sessions with her powerfully moving poetry speaking to the Carribean contribution to redefining Britain's History over fifty years ago.

The audience heard a moving report of the racist mass immigration snatching of 50 Jamaicans this month, and their forced removal from the UK on a Government chartered plane.
Zita spoke of the urgent need to challenge the UK's systemic race and religious hatred and inequality if we are to avoid handing a worse future to our children than that experienced by our parents, who faced signs of ' No Blacks, No Irish, No dogs'. 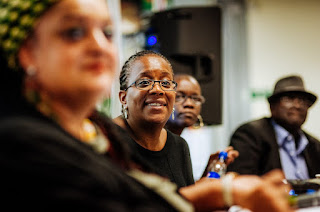 Zita introduced BARAC's 2025: A Vision for Race Equality in Britain strategy paper and called on the packed audience to contribute and support this campaign highlighting that race inequality must be challenged by all civil society  social justice for all.
Donna Guthrie, BARAC Women's Officer, outlined the devastating effects of six years of austerity on the black communities in terms of entrenching racial inequality in every sphere of life from housing, health, education to employment.

Outlining that in the epicentre of the cuts, the public and voluntary sector, cuts have seen jobs of Black people disproportionately lost. With employment discrimination our black communities are first to be fire and last to be hired, disproportionately represented in low paid, casusl and zero hour contracts.

Economic disadvantage on this scale leading to an acute lack of access to adequate housing.
Donna spoke of the need to a need to address the widening race pay gap evident in all age and categories. 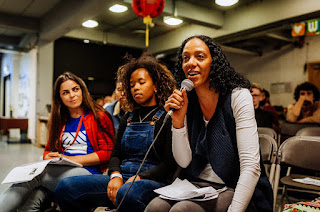 Colette said that this was an expression of the frustration of young people not just to police brutality but of racial inequality in all aspects of our lives. College spoke of one 14 year old targeted by police outside his school that was thrown into a police van, arrested and then de-arrested. He was subsequently excluded from school for bringing the school into disrepute as he was wearing his school uniform.

Consequences of police harassment for him being life destroying as he was forced out of mainstream education. This is not an isolated but worryingly common life experience of many young black people in Britain.
Colette spoke of the historically significant 1945 Pan African Conference that took place in Manchester that lead to African countries sucessfully fighting for independence. The second PAC45 conference is due to take place this October in Manchester and will focus on issues affecting women including violence against women and FGM. 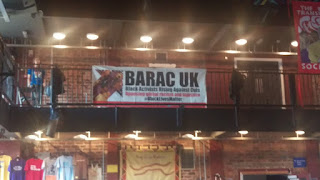 The audience discussion proved extremely emotional as those from the floor expressed disgust and despair at the state of racism in Britain.

From the increased attacks on the Muslim community to Xenophobia and the migrant crisis and the government’s racist  Immigration Act those present agreed there was an urgent need to position a race equality agenda at the heart of Anti austerity Labour movement.

Those present welcomed the strategy paper and pledged to use this in discussions in their local CLP's. Many signed up to get more involved in BARAC and expressed that this was the best session they had attended so far at TWT2016 and called for platforms and discussions in our grassroots groups, Momentum and Labour to be more inclusive and diverse by including Black voices and their experiences.
Posted by Lee Jasper's Blog at 12:44