BARAC UK together with a broad range of anti racist campaigns and organisations with trade unions, has called a protest and march in response to the verdict in the Trayvon Martin murder trial and the murders of Azelle Rodney & Jimmy Mubenga in the UK. Also in response to recent revelations of police spying on the Lawrence family and their supporters and infiltration of anti racist organisations.

Click on the link below to watch a video of a poem written and performed by National Co-Chair of BARAC UK, Zita Holbourne featuring the protest held last year outside the USA Embassy in London and the press conference and rally held outside Downing Street with the family of Trayvon Martin, also in 2012. The video also promotes the forthcoming protest and march taking place on 27 July in London. 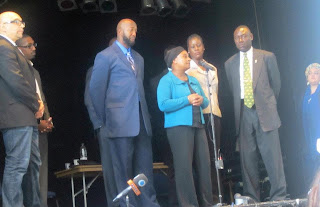