British racism in the 21st century

Any serious analysis of the scale and nature of British racial discrimination should be informed and illuminated by the plethora of Government and Non Governmental Organisations monitoring reports, which reveal a level of economic injustice and institutional racism that is forensically evidenced in statistics revealing widespread structural discrimination and institutional racism.  The racism we see in Britain today has a strong economic focus and unjustly condemns people to permanent poverty, deprivation ill health and high unemployment.

Britain’s sense of itself is as a nation where hard work and talent can trump the circumstances of one’s birth. Britain is a meritocracy, it is said. A nation where for the most part the scourge of racism and discrimination has been largely eradicated through a combination of changing social attitudes, legislation and the adoption of a range of equality policies.
Are we a society that aspires to ensuring genuine equality and fairness for all its citizens regardless of race or faith?

Any society that believes in the principle that all its citizens are equal must ensure that irrational and costly discrimination is rooted out of all aspects of society. This has to be the basis of any modern, successful, inclusive, liberal and truly meritocratic society.
Racism leaves the perpetrators morally weak and intellectually incoherent. It brutalises and strips the humanity from both the perpetrator and the victim.

In the UK increased diversity in some areas of public life, sports and entertainment has given the general impression that real progress has been made in tackling racial discrimination. This self-image of apparent diversity and superficial equality has disguised the fact that for many the barriers to success remain as high as ever. 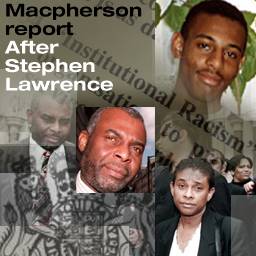 In addition the Race Relations (Amendment) Act 2000, the Lord Scarman and Sir William Macpherson reports, and introduction of the Equality Act 2010, are all cited as further evidence of the “post racial” nature of British society.
This view that British society has for the most part dealt with the issue of racism is one that is shared by many.  The reality however for millions of British people of African, Caribbean or Asian descent is quite different.
Most mainstream political parties have abandoned their commitment to effectively tackling racism in Britain.

Most share a broad consensus that racism has all but been defeated and reduced to a small number of individual cases that reflect personal prejudice rather than institutional failures.

Racial inequality in the UK starts at birth. Babies born to African Caribbean, Pakistani and Bangladeshi families are less likely to survive their first year of life. Nothing so graphically illustrates the reality of the legacy of racism and racial disadvantage as this startling fact.
Black and sections of Asian communities can expect fewer life chances, lower standards of education, higher unemployment, a lower income and suffer higher rates of mental ill health. We are more likely to be unemployed and, if employed, we are more likely to paid lower wages on average than white British citizens. We are more likely to suffer ill health and die a premature death. We are less likely to get access to bank loans and more likely to be in debt. For the most part the majority of our communities endure higher and increasing rates of child poverty and higher rates of crime.

As African, Caribbean and Asian communities we need to reassert and reestablish the importance of unity in the fight against racism if we to stand a chance of changing British society for the better. We have become far too fragmented, complacent and segregated in our struggle against racism.

There is an overriding and desperate need to unify on the basis of what we have in common and avoid the retreat into ethnic or religious particularism that so weakens and undermines our attempts to effectively challenge racism in society.

As a result of increasing rates of racism and a failure to unify our struggles, future generations face unacceptable levels of worsening institutionalised racism and religious discrimination through sustained economic exclusion and the continued process of criminalisation.

Our goal now must be to unite all sections of our communities and establish a new anti racist campaign focused around a core set of political and legislative demands capable of delivering equality in our lifetime.