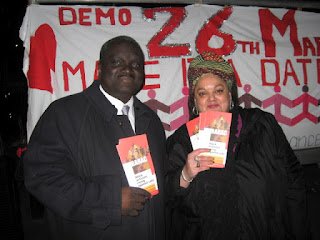 The government want public sector workers to pay more into their pensions, get less out and work longer - they have already started imposing higher contributions which combined with pay freezes across the public sector and many workers losing their working tax credit equals a huge pay cut at a time when working class people are being driven into deeper poverty every day. Proposals announced in the spring Budget on regional pay mean that workers outside London might face even more cuts to pay.
BARAC is supporting the May 10th (M10) strikes and BARAC members and supporters will join the hundreds of thousands of public sector workers from unions in the Civil Service, Health Service and Education in support. Cuts to the public sector are impacting disproportionately on black workers and service users driving black communities into deeper poverty and a multiple impact on young black people and black women.
Kingsley Abrams, Unite Executive Council and BARAC member said;
"Our members have been pushed to the absolute limit. They have had enough of being forced to do more for less, on top of a draconian diet of cuts and having their concerns ignored by this Tory-led coalition government. We oppose the road of austerity and cuts taken by Cameron and Osborne".
Zita Holbourne, BARAC National Co-Chair and PCS National Executive said;
“These attacks on our pensions are part of a wider attack on us as public sector workers. Public sector workers are struggling to make ends meet and as the biggest sector employing black people we are experiencing a disproportionate impact. There are over 1 million young people unemployed and 1 in 2 young black people are unemployed. Forcing public sector workers to work longer has a knock on negative impact on young people, yet at the same time that the poorest are being forced into deprivation the government is privatising the public sector in order to line the pockets of their rich friends in business”
Lee Jasper, BARAC National Co-Chair said;
“I support and applaud the trade unions taking action on May 10th in defence of pensions.  Thousands of hard working public sector workers should not be punished for the irresponsible actions of the few and should not be made to pay for a crisis they didn’t cause. It’s a disgrace that this government is intent on punishing the poor and increasing discrimination and we must stand united against all these attacks.”
Ends
BARAC is a national anti-cuts group campaigning against the disproportionate impact of cuts on deprived communities and black workers and service users.
Contact:  Zita Holbourne, 07711 861660 Lee Jasper, 07984181797  Email: barac.info@gmail.com
Web: blackactivistsrisingagainstcuts.blogspot.com Twitter: baracuk Facebook: ‘black activists rising against cuts’ 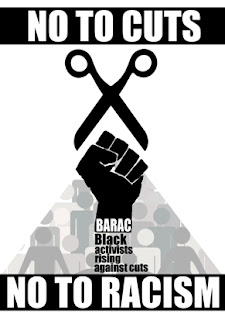