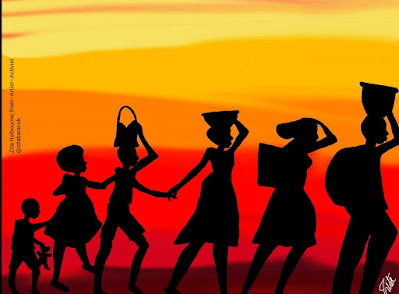 image credit: artist Zita Holbourne
BARAC supported this initiative to remember refugees in the week of Remembrance Day, organised by Lesbian and Gays Support the Migrants.
Due to coronavirus restrictions and lockdown a physical vigil / event was not possible so our chair Zita gave the following statement and contributed art as part of the online Remembrance.
"As part of our online Remember Refugees week, we're very pleased to bring you this guest post and artwork by Zita Holbourne from @BARAC UK. Please follow BARAC to keep up with the incredible work they do." Lesbian and Gays Support the Migrants
During the Coronavirus pandemic those who are displaced and forced to flee their homes because of persecution, climate change, poverty and conflict have become the unforgotten, treated as if they are less than human with no regard for the impact of the pandemic on them and no attention given to their safety, protection or care.
Usually BARAC UK would be coordinating regular aid and solidarity missions to France but the pandemic has prevented us and others who regularly provide support from doing so.
Knowing that there are many families here in the UK with no recourse to public funds I have worked with others in my local community to provide food donations every week during the summer and we directed some of our humanitarian aid funds to support the most vulnerable families, some of whom had newborn babies in the middle of lockdown with no access to benefits or government COVID-19 measures.
https://uk.gofundme.com/f/BARACHumanitarian
We also wrote to the UN special rapporteur on poverty and human rights to raise concerns.
Some of us in BARAC are part of public sector unions and work with other public sector unions across Europe and in those roles we have campaigned for a number of years for the need for properly resources public services responding to those who are refugees and who are migrants.
There is woefully inadequate staff of rescue boats for example. Migration to the Canary Islands has increased by 500% this year so in order to respond to the needs of those arriving from refugee centres to support and processing, there needs to be an increase in public service personnel.
After over a decade of austerity cutting public services across Europe the impact of the Covid crisis will be more cuts with the most vulnerable and discriminated people in our societies bearing the brunt including those who are displaced through no fault of their own.
The human rights of children in particular in being denied the right to be reunited with family is one that must be a priority – children should not be made to pay for a crisis they did not cause or to be put at risk of trafficking and abuse.
Member states under the 1951 UN Geneva convention and 1967 protocol should provide legal protection to asylum seekers and not return asylum-seekers or refugees to a country where they face serious threats to their life or freedom.
Our thoughts and condolences are with those who died trying to cross the English Channel which included small children. Nobody takes children on a perilous journey unless what they are fleeing is far worse that what they are facing.
On the other side of the so called hostile environment is a situation also close to our hearts – the treatment of the Windrush Generation and their descendants.
The Home Office Windrush Lessons Learned 30 recommendations are yet to be implemented and the majority of those entitled to compensation are yet to receive it and some have sadly passed away in the process.
This is not just an issue facing the one generation but their children and grandchildren too. We send solidarity to Osime Brown and his family - Osime is a young man who is autistic and who the Home Office want to deport to Jamaica despite him leaving there as a very small child and Britain being his home.
Under operation nexus the government have deported too many young people just because they were racially profiled and stopped and searched disproportionately with no charge, no access to the criminal justice system.
In deporting generation upon generation they create a situation of displacement and destitution. We would like to bring your attention to a campaign BARAC is involved in to stop the relocation of an immigration enforcement centre to the London borough of Newham - one of the most multi cultural boroughs in the UK which the Home Office want to locate in an old tobacco warehouse whose roots are connected to the enslavement of African people, at a dock with roots embedded in colonialism and the British Empire, creating an environment of fear, racism and hostility.
We would appreciate it if you were to sign and share our petition: https://www.change.org/p/home-office-oppose-warehouse-k-immigration-enforcement-centre
We remember those who have passed, we see and stand with those trying to survive and get to a safe place and those who bare the brunt of hostile racist immigration policies and laws when human rights and the right to survive, to live and to thrive should be accessible to all.
Zita Holbourne National Chair and co-founder BARAC UK Artist, poet and author of Striving for Equality Freedom and Justice.
Posted by Zita Holbourne, Poet~Artist~Activist at 19:57