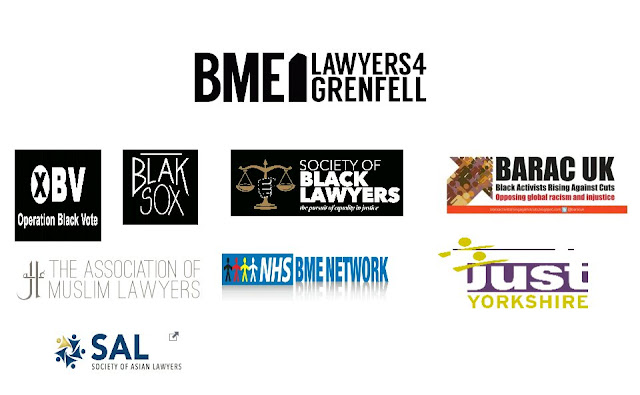 BMELAWYERS4GRENFELL, an umbrella action group incorporating leading BME Organisations and residents challenge the appointment Sir Martin Moore-Bick as the Chair of the Grenfell Fire Inquiry; the failure to consult survivors and residents on the appointment, the terms of reference, and the members of the advisory panel.

BMELAWYERS4GRENFELL has already highlighted, on numerous occasions, the invidious nature and consequences of the failures to respond to survivors' and residents' concerns, to acknowledge their concerns, to answer their questions and to consult with them. The government cannot repeatedly acknowledge its failures in its handling of this wholly avoidably tragedy but continue to act in a wholly cavalier manner toward survivors and residents.  Having previously insisted that Grenfell Tower residents will be given a say over the direction of the investigation, the Prime Minister has ridden roughshod over their concerns in her appointment of Sir Martin Moore-Bick.

BMELAWYERS4GRENFELL do not question Sir Martin Moore-Bick's vast experience but do question the appropriateness of his appointment given his commercial background and publicised decision-making. Furthermore, his public statements following the announcement of his appointment caused considerable dismay in the community.  Residents and survivors of the  Grenfell Tower fire  had already made it clear that they are unhappy with its narrow remit and want a broader investigation into the causes and aftermath of the disaster that killed at least 80 people. However, Sir Martin Moore-Bick, has already commenced his role with extreme caution, stating, inter alia:

"I've been asked to undertake this inquiry on the basis that it would be pretty well limited to the problems surrounding the start of the fire and its rapid development, in order to make recommendations as to how this sort of thing can be prevented in the future,"

"I would hope to be able to answer basic factual questions such as: how did the fire start, how did it spread, how was it able to engulf the whole of the building at such speed? And also questions such as what internal precautions there were, what steps were available for alerting residents and for allowing them to escape."
BMELAWYERS4GRENFELL urge the Prime Minister to withdraw this appointment given its lack of credibility and appoint a Chair with a professional history and experience of appreciating the needs of social housing in this diverse community all too often ignored by the wealthiest Borough in the country.

The tragedy that has unfolded in our community is unprecedented. This is only the beginning and we must insure that we support those who seek a voice within our systems of justice and equally we keep a dialogue on behalf of those who have lost their lives and are unable to speak. The continued failure by the local authorities in the aftermath is unacceptable. The community around Grenfell and those around our community are mobilising. There is an awaking and need for answers that must be met with respect and taken seriously not with tokenism.  The people who I have met through various BME law associations have had a direct impact on the daily issues that some survivors have faced, for that, as a community we are grateful. We must keep working together with those who can keep on shining a light on the mechanics of change.

Zita Holbourne, National Chair of BARAC UK said:
What survivors and families of the victims of the Grenfell Tower have been through is unimaginable. They deserve dignity and respect going forward and to be acknowledged and have their articulate voices heard.  In contrast to the community response, the official response has been woefully inadequate and the reality that we have heard first hand from survivors and the families of those who died, at the Houses of Parliament a few days ago is very different from what we are being told by Government is occurring.

Ismet Rawat, President Association of Muslim Lawyers said:
It is not just the survivors, residents and their families and supporters but the community at large, who are very clear that this tragedy is not just about the limited ‘factual' issues that Sir Martin Moore-Bick referred to (and may well have been imposed upon him) but that it raises extremely important questions about our society as a whole and the manner in which those who hold power deal with discrimination and deprivation. The Macpherson Inquiry was ultimately about more than the tragic murder of a young black man and, similarly, this inquiry will be about more than the events of one fateful night.

The Grenfell community cannot begin to process its huge trauma or even countenance healing when it is being repeatedly lied to, misrepresented, and treated abhorrently. There must be accountability.  Any inquiry must have legitimacy and must be honest, open and accountable. The survivors and residents do not demand the right to choose the Inquiry Chair.  They were promised input and were and remain entitled to it. It is not just sufficient that justice is done, but that it is SEEN to be done. Similarly, justice delayed is justice denied therefore expediency is also key. There cannot be another 4 years before a report as there was with the Lakanal fire.

Peter Herbert, Chair, Society of Black Lawyers said:
This government is well aware that the Grenfell community has lost confidence in the white male middle class model but continues to impose this in appointing a Chair who has little or no personal or professional insight into the cultural, religious, and ethnic diversity represented by the Grenfell community and, indeed, has been overturned upon appeal for failing to have that insight in a specific case centered on social housing.

It must be noted that the Stephen Lawrence Inquiry and the Scarman Report only managed to build the confidence of the local community by conducting a detailed consultation sitting as they did with a diverse panel of advisers who helped them develop the trust of the victims and survivors.  The appointment of a diverse panel of experts that understands not only the surrounding technical matters, but the need of the local community is essential to the success of this Inquiry.

If the terms of reference remain as they are, BMELAWERS4GRENFELL will consider commencing Judicial Review proceedings. The Inquiry must be capable of guaranteeing answers that honour the memory of all those who have lost their lives and those that remain.

Note to editors 2:
BMELAWYERS4GRENFELL were instrumental in arranging the Grenfell Tower meeting called by Shadow Home Secretary, Diane Abbott M.P. 29 June 2017.  The meeting was also addressed by the Shadow Justice Minister, Richard Burgon MP, Emma Dent Coad MP and David Lammy M.P. Over 150 survivors, residents, family members and supporters denounced the abject failure of the Government and the local authority to provide answers, their repeated misinformation regarding rehousing of residents and the alleged support provided, and discussed a list of demands that remain unmet. These were later reflected in the letter written by the Leader of the Opposition, Jeremy Corbyn, to the Prime Minister, Theresa May.

The demands survivors and families reiterated at the meeting at the House of Commons 29 June 2017 are as follows:
1. The TMO to be dissolved and responsibility moved to the LB Southwark or other competent London Borough;

2. The Government Coordinated response team to be available 24 hours a day, 7 days a week and accessible in person, by telephone and email so that people are not greeted by answerphone messages and that interpretation services and emergency contacts are accessible;

4. That HMG to offer full counselling services to all survivors, family members of survivors, volunteers, eye witnesses and local residents / community and mental health support provided for those who require it;

5. To direct that survivors are not identified by wristbands but by photographic ID;

6. To provide a comprehensive undertaking not to house people outside the Borough or in temporary housing for longer than three months, keeping moves to an absolute minimum;

7. Charitable donations be collected by one central charity with a full record of money provided and access to an interim payment to all survivors and families of the victims being provided as was done following the Manchester Arena bombing;

8. The Home Secretary & Lord Chief Justice to state immediately why the Grenfell community was not consulted prior to the appointment of the retired Court of Appeal Judge;

9. The Home Secretary to explain what consultation is to occur before the terms of Reference are finalised and to invite the Judge to attend a meeting on 19th July of BME Lawyers4 Grenfell to be held at the BBC to explain to survivors how they can influence the scope of the Inquiry;

10. The Home Secretary to confirm in writing within 28 days that undocumented survivors are given full UK citizenship forthwith; (No assurance in writing to date);

11. To provide regular updates directly to a Grenfell website that is accessible to survivors, local residents and their families;

12. To provide a team of appropriately diverse social workers who can liaise with children, the elderly and the disabled;

13. To give assurances in writing that anyone provided with negligent advice by the RBKC must not be disadvantaged in their right to social housing in the future;

14. The release the total numbers of survivors as opposed to the numbers believed to be dead and missing within 14 days;

15. A guarantee that the Inquiry Chair will adopt a wide term of reference that goes beyond the narrow one he has outlined in his recent statement;

17. To ensure a properly diverse expert panel to sit alongside the Inquiry Judge on Housing needs, Fire and Safety Construction, with suitable experience of Equality, Diversity & Social Welfare considerations;

18. To provide all written communications, whether in print or online in a broad range of languages responding to the needs of the diverse group of people concerned.  In addition, interpretation services to be made available, for example through the use of Language Line;