Representing BARAC UK at Glastonbury 2016; a report by Parisce Francis


Team member for this year's BARAC team for Workers Beer at Glastonbury writes on her experience.

If you are interested in volunteering next year get in touch or watch out for updates.  BARAC.info@gmail.com.

I had told myself that 2016 was going to be the year that I finally go to Glastonbury, but I didn’t get

tickets. They sold out in a stupidly small amount of time and I missed out even though my mum, my

friends and I all tried. Needless to say when I saw the BARAC request for volunteers on Facebook I

before. Let me tell you I will never be buying a ticket again! Volunteering is the way to festival!

Honestly, my first impressions were not great but that was completely outside the control of BARAC

and Workers Beer Company (WBC). What should have been a 4 hour journey (according to Google

The coach from Manchester arrived in the WBC campsite, known as the village, just as breakfast was

beginning to be served, so my disappointments fell away as my belly filled. During breakfast I met

Aaliyah, a member of my BARAC team. As a group, we had chatted a bit over Whatsapp but not met

in person. Aaliyah showed me about; the showers, portaloos, posh toilets, where to set up my tent

and introduced me to the rest of the team; Barbara and Felicia.

The village is definitely one of the reasons why I’d volunteer again. It is located pretty centrally;

there are hot showers, toilets that flush and somewhere to charge your phone. We were also given

2 meals a day and 2 drinks vouchers after each shift. Within the food/beer tent there was a laid

back, community feel which meant that even if you started off sitting alone charging your phone,

before. Similarly it was nice to walk around the festival site and see familiar faces.

bar. I have been at festival bars where the queues are 30 men deep and have seen people get angry

with thirst. But that was nothing to worry about; it was really easy and fun. We had a quick brief

before our first shift and were then put to work. We got a pretty good deal; 2 shifts starting 11am till

5pm and 2 starting at 10pm till 3am. Behind the bar you could still feel the party vibes. Our first shift

thought we were on the dance floor.

My time at Glastonbury differed greatly from my previous experiences at festivals, not only because

I was there as a volunteer, but because of the company I was in. Usually I’d go with my friends from

of the conversations we had. As 4 black women we discussed everything from the transgressions of

children. Other people in the WBC village were volunteering for a range of social or environmental

causes/groups so conversation was never dull with other teams too. Being around such politically

active and aware people when the result for the referendum was announced was pretty special.

Now I’m home (and mud free) I think Glastonbury definitely lived up to the hype, it was huge! 2016

was not about headliners (no offence Adele) it was all about grime, seeing Novelist get the crowd to

chant ‘f**k David Cameron’ isn’t something I’ll forget. But even if music isn’t your thing there are

so many other things going on like the cinema, comedy stages, even a healing circle. I definitely

recommend volunteering and  if you are there next year I’ll see you there! 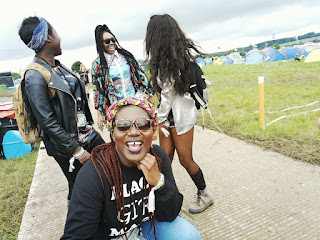