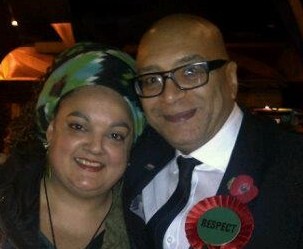 I attended the launch rally and party for Lee Jasper’s election campaign to become the next MP for Croydon North at Crystals Night Club on Sunday night (11th November).

Lee had already received endorsement from legendary US Civil Rights Leader, Reverend Jesse Jackson, who has been a great supporter of our campaigns in the UK for racial justice over the years.  Rev Jackson stated of Lee that he is a committed freedom fighter for equality and economic justice who can make a real difference in society. He went on to say that Lee has the dedication and uncompromising commitment to stand up for the moral centre in our politics and to defend the poor from the ravages of austerity.

Amongst the broad range of speakers at the rally, all there to give their testimonies and backing of Lee as the Respect candidate for Croydon North, was the Managing Director and Editor of The Voice – Britain’s leading black newspaper.

George gave a forceful speech endorsing Lee’s campaign, drawing on Lee’s track record as a long standing, committed and determined activist standing up against discrimination and injustice and expressing a view that as a candidate not from one of the three main parties, Lee would be in a position to speak out and stand up for the people of Croydon North in Parliament if elected and not find himself restricted in what he can say by the constraints of the parliamentary party system. George confirmed the full backing of The Voice newspaper for Lee’s campaign as a committed anti-racist campaigner and voice of the people.

This is a very positive step in the campaign and I encourage all Voice readers and the wider black community to get behind that campaign and encourage family, friends, colleagues and associates in the constituency to use their vote on 29th November and assert their democratic right to an MP that will fight with them, not against them, who stands for equality and justice, not cuts and deprivation.

Lee’s campaign is very much a people power campaign and the community is encouraged to not just get behind it but get on it and offer your time, skills and commitment over the next fortnight to continue building the campaign.  Every vote counts and every person working to achieve a vote is valuable.

As one of the speakers at the rally I spoke about Lee’s history as a committed community activist for equality and justice and a positive role model for many black activists who came after him.  As my co- chair and co-founder of Black Activists Rising Against Cuts (BARAC) UK Lee is dedicated to the fight against austerity and cuts and the impact of Con-Dem policies and actions against the poorest and most vulnerable in society and the disproportionate impact of cuts on black workers, services users and deprived communities. Croydon North is a deprived area and one that has been hard hit by cuts. Croydon has above-average levels of deprivation when compared with other London boroughs, with five wards in the borough ranked as being in the top 10% most deprived wards in the UK. Croydon also has the 18th highest level of child poverty in London (out of the 32 boroughs in the capital). Unlike any of the mainstream candidates in this election, those voting have an assurance that Lee will not be voting for cuts and will work tirelessly to oppose cuts as a leading anti-cuts campaigner. He will speak out for all the people in Croydon North and he will stand with them.
Martin Luther King said:
‘History will have to record that the greatest tragedy of this period of social transition was not the strident clamour of the bad people, but the appalling silence of the good people.’
I call on the good people of Croydon North to please use your vote against cuts and poverty and for justice and equality and vote Lee Jasper on 29th November.