Why Black People Should Join the TUC March, A Future That Works, on October 20th

On March 26th 2011  500,000 people marched against government austerity plans. The Trades Union Congress (TUC) have organised another march to bring together trade unions, workers and communities to demonstrate against the cuts.  The TUC says:

‘Austerity isn’t working. Our country faces long-term economic problems. But our political leaders have failed to face up to them. For the next five years or more, unless policies change the economy will not grow, incomes will not rise, and there will be almost no new jobs. If the government keeps on with big spending cuts and austerity we face a lost decade. Even on their own terms government policies are failing. To close the deficit we need a healthy growing economy that generates tax income. But austerity has led to a vicious circle of decline. Instead of just letting the banks go back to business and bonuses as usual, we need policies that promote new and old industries. This new approach would create jobs, especially for young people. It would encourage companies to raise average pay, penalise big bonuses and invest in training and new industries. It would crack down on tax evasion by big companies and the super-rich. It would tackle the growing inequality between the super-rich and everyone else. Rather than deep, rapid spending cuts, we need to reverse our decline and build an economy that works for ordinary families.’

Since the last march there have been a number of public and private sector strikes including co-ordinated action where several unions took strike action at the same time.  Whilst the government has only made 20% of their planned cuts people are already feeling the negative impact of the cuts made.

I am marching as a trade union representative in the PCS union and as the co-chair of an anti-cuts campaign, BARAC UK, but I am also marching because the cuts impact on me and my family and I am suffering as a result. Since the last march the government have imposed increased pensions contributions on me meaning that I now have double the amount of money taken from my wages each month towards my pensions whilst the government want me to work longer and receive less pension when I retire and plan to impose further increases in my contribution. I have suffered the impact of a pay freeze for over 2 years and whilst my pay has been frozen the cost of living has gone up – groceries, bills, transport and other costs have increased meaning in effect I am receiving a salary cut. Also this year the government stopped my working tax credit.  It means that I am over £200 worse off per month.  When you are struggling to make ends meet that £200 has a huge impact. Over the past two years whilst my pay was frozen my son started 6th form college and with this came the slashing by the con-dem coalition of EMA and  additional travel, books and stationary costs.  He is now one of the first set of students to face the tripled tuition fees of £9000 per year for university. I feel like I have failed him as a parent because I don’t earn enough to pay the fees which means he has been forced to take out a student loan but I don't believe that there should be fees at all - education should be free and accessible to all, not a privilege for the rich. It’s estimated that the average student will leave university with debts of £45,000 because on top of the tuition fees is interest and debts of living costs.  In the first two weeks of university we have faced additional costs of over £2500 for study trips, books, materials and travel costs.

These are my personal reasons for marching but there are many more and I know there are many thousands of people facing what I am facing and worse.  I am also painfully aware of the disproportionate impact of cuts on black and minority ethnic people and deprived communities and that we have a government that do not care about the impact on the poorest or on race equality – they have destroyed the Equality and Human Rights Commission and are threatening to reduce our protection in law by weakening the existing Equality Act.  History tells us that in time of economic crisis black people and migrants are blamed and attacked by the far right. Because of institutional racism black people are more likely to be in the lowest grades, on the lowest pay, living in the poorest communities, areas of the UK officially declared deprived.   Of 3 million people unemployed over 1 million are young people and 1 in 2 young black people are unemployed.  The march has a focus on young people and it’s an important reason for us to march – if we don’t fight for our children’s future there will be nothing for them - for the first time in decades young people are facing worse prospects than their parents. The government’s austerity programme will not help the economy recover, as people are driven into deeper poverty they won’t be able to spend. The cuts are not about helping the economy, they are ideologically driven. If the government were serious about economic recovery they would focus on closing tax havens and collecting the £120 billion lost each year in tax evasion and avoidance and uncollected taxes.

BARAC is calling on black communities to march on October 20th in London, Glasgow or  Belfast, with their families and friends and colleagues against cuts and against racism. If you are in a trade union you will be able to find information from your local rep or on your union website about arrangements for getting there and where to meet. If you are not in a union you can just turn up and join the march but if you would like to march with other black people and organisations, you can join BARAC in London and Scotland.

The main march will start at Blackfriars and Embankment with people arriving from 11am.  There is also a shorter march from Picadilly or an option of going directly to Hyde Park for the end rally. Disabled people who want to participate in the long march are invited to join the front of the march. Full details can be found here and you can also sign a pledge to say you are marching and why:  http://afuturethatworks.org/
There’s also a boat for those arriving via South West London;  http://afuturethatworks.org/take-the-boat-to-the-march/

People can also join the BARAC Facebook event page for the march here:  ‘If we stand for nothing we fall for anything, march on October 20th, No to Cuts, No to Racism ‘https://www.facebook.com/events/116270628522766/

For information about coach and train places from around the UK: http://falseeconomy.org.uk/oct20
For more info about BARAC email barac.info@gmail.com

Malcolm X said; ‘If you don't stand for something you will fall for anything.’ We need to stand together, united against austerity and racism, not just on October 20th but going forward against the cuts, injustice, poverty and discrimination. 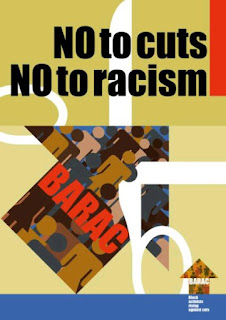