Congratulations to Zita Holbourne, who has won the award for Positive Role Model for Race, sponsored by Q Hotels, at this year’s National Diversity Awards. Zita faced some stiff competition to win the award having been one of the three outstanding shortlisted nominees from the thousands of nominations received for the awards this year. 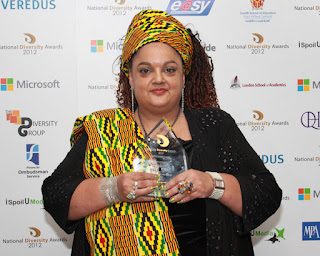 Zita is a working mother, trade union, community and human rights activist, a poet, writer and visual artist. She is co-founder and national co-chair  of Black Activists Rising Against Cuts, a national campaign group set up to respond to the disproportionate impact of cuts on black workers, service users and communities. She is elected to the National Executive Committee of the Public and Commercial Services (PCS) Union and Action for Southern Africa (ACTSA) and to the Trades Union Congress (TUC) Race Relations Committee.

Zita won the award because she is a champion for equality and diversity and a committed human rights activist with 20 years experience specialising in this field.

On winning the award Zita said;

‘It’s an honour to win the positive role model for race award and have my work recognised in this way. I hope that the award stands to recognise the importance of trade union and community activism in advancing race equality. All of us representing the various equality categories of the awards, represent the majority, we are not a minority or an add on, we are society.
Right now, the progress made on equality over decades is under threat. We have a duty not just to defend the hard earned gains made by those who went before us but to achieve equality in our lifetime and create a legacy for future generations.
Freedom is not the power to do what we want but to be empowered to do what’s right. Until each one of us is at liberty to embrace who we are without fear of hatred or discrimination we all have a responsibility to stand up for equality and justice.’

' It is great to see Zita's hard work and commitment  recognised in this way. It is also recognition I believe of the central role trade unions and their representatives play today in defending and advancing the cause of equality in Society. Zita's contribution to this cause is much appreciated by me and PCS is proud to have her as one of its leading representatives.'

The National Diversity Awards 2012 whose headline sponsor was Microsoft was hosted by Brian Dowling at Manchester’s Midland Hotel on the 21st September. The night was a glittering success with appearances from Paralympic heroes Jody Cundy and Claire Hardy, BBC journalist and model Amal Fashanu, the stars of ‘My Transsexual Summer and CBeebies presenter Cerrie Burnell.’ Spectacular performances also took place from singing sensation Ruth Brown from ‘The Voice’ and MOBO unsung award winner Esco Williams. The L project also performed their moving LGBT anti bullying charity single ‘It does get better’. The glittering event attracted a wide range of sponsors from the likes of Northumbrian Water, The Financial Ombudsman Service and Manchester City Council. 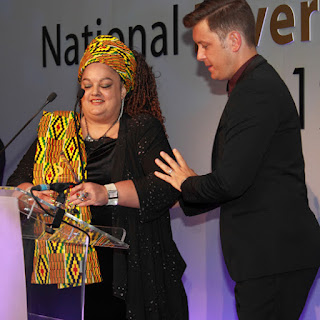 The National Diversity Awards is a unique event celebrating individuals, community organisations and companies, from a grass-roots level, for their selfless hard work on a day to day basis towards a more inclusive society. The event recognises and celebrates all aspects of diversity within one ceremony including age, disability, gender, race and LGBT.

After generating so much interest and support in its first year, the awards are sure to go from strength to strength with next year’s event being held in Leeds.

Nominations for next year’s event open in January and for more information please visit www.nationaldiversityawards.co.uk.