On 20th October 2012 the TUC have organised a march against  cuts and austerity entitled 'A FUTURE THAT WORKS'. BARAC is calling on our members and supporters to participate in the march and to bring your family and friends. 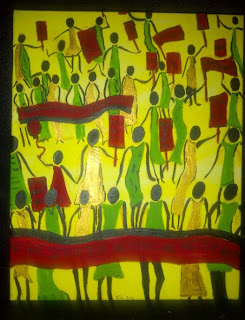 In times of austerity racism increases. Black workers, service users and communities are disproportionately impacted by cuts because we are largely concentrated in the poorest areas on the lowest pay. Black women are hardest hit by cuts to public sector jobs and whilst over 1million young people are unemployed 1 in 2 young black people don't have a job. University and higher education is out of reach to the poorest .


The Con-Dem Coalition have attacked multiculturalism, are destroying the Equality and Human Rights Commission and want to reduce protection against race and other discrimination in law.

Black people face discrimination in employment, education, the criminal justice system and wider society with young black people up to 32 times more likely to be stopped and searched than white people, more back men in prison than in university and largely concentrated in the most deprived areas of the UK.

For these reasons and many more BARAC believes it is essential that we march on October 20th against cuts and against racism.

More information about the march can be accessed here: http://afuturethatworks.org/why-we-are-marching/

Accessibility and routes of long and short march are here: http://afuturethatworks.org/march-logistics/accessibility/

Information about coach and train places to travel to London for the march:
http://falseeconomy.org.uk/oct20