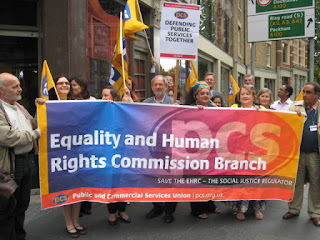 BARAC supports the PCS Save the EHRC Campaign and the planned industrial action being taken by PCS union members at the Equality and Human Rights Commission on Thursday 23rd of February.
A 63% cut to budget and 72% cut to staff will lead to legal advice and representation being severely reduced or non-existent as several hundred advice and caseworkers  are made redundant  and the EHRC Helpline is cut.
BARAC is concerned that these cuts will mean that those on the receiving end of race and other forms of discrimination will have no access to legal advice and that when public sector organisations fail to comply with the public sector duty no enforcement by the EHRC will be carried out allowing employers and services providers to ignore any disproportionate impact of their policies and practices on black and minority ethnic workers and service users.
At a time when the programme of con-dem cuts is impacting disproportionately on those who face the most discrimination including black service users, workers and communities there is likely to be an increase in the number of people seeking advice and support in dealing with discrimination.
In addition the end of the EHRC grants programme which has given 14 million pounds to organisations providing advice and legal representation to victims of discrimination means that many of those organisations are no longer able to continue their work due to lack of funds. It also means that there is no organisation for individuals to turn to for advice. BARAC is concerned that the inability of individuals to challenge discrimination because they have no support will lead to an increase in discrimination.

Zita Holbourne, Joint Chair of BARAC said;  ‘The EHRC has  a statutory remit to promote and monitor human rights; and to protect, enforce and promote equality across the nine protected grounds which include race, gender and  disability. It is of grave concern that the government programme of cuts to the EHRC will lead to it failing in its statutory remit and in turn failing huge numbers of individuals facing discrimination, particularly those who are being forced into poverty and deprivation through con-dem cuts. This is why we will be standing with PCS members in the EHRC on Thursday.

Lee Jasper, Joint Chair of BARAC said, ‘The withdrawal of the EHRC grants function will result in fewer people, particularly the poorest taking discrimination cases and less access to justice for those who are most likely to be on the receiving end of injustice through discrimination.  I call on the government to stop the cuts to the EHRC and properly resource it so it can carry out its functions and work towards elimination of discrimination at work, in service provision and wider society.

ENDS
Black Activists Rising Against Cuts (BARAC UK) is a national organisation with regional structures campaigning against the disproportionate impact of cuts on deprived communities and black (BME) workers, service users and communities