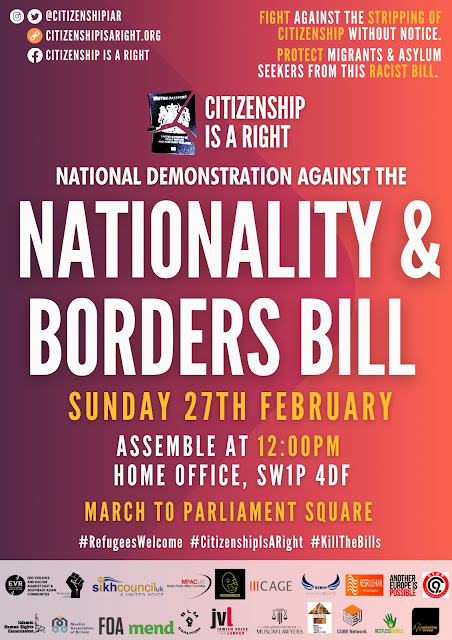 We are campaigning against the Nationality and Borders Bill which if passed, could create a new Windrush Scandal on an even larger scale.  Given that the Windrush Lessons Learns recommendations have not been implemented since publication almost two years ago, it is clear that the government do not plan to learn lessons as they are intent on new legislation which further reduces and breaches the human rights of  migrant communities and their descendants and families  and those seeking asylum for those who are displaced, fleeing the impacts of climate change, conflict, persecution and poverty.

We oppose many aspects of the bill, including the impact on refugees on small boats trying to get to the UK, reducing their rights and access to asylum, push back of small boats into the sea breaching human rights and maritime laws, removing support from survivors of human trafficking and stripping citizenship from people, including those born in the UK but with a parent born abroad.

These are just some of the draconian and racist aspects of the bill which  if passed would create another Windrush Scandal on a much larger scale and breach a range of international human rights laws.

The measures the government wish to introduce will disproportionately impact on black and brown people.

We are actively campaigning to oppose the bill and working in coalition of various groups to do this.

Firstly we are co-founders of the Citizenship is a Right coalition which brings together a range of civil society and race equality groups  in opposition to the bill.

Here are some actions you can take:

1. The bill is currently being debated in the House of Lords and so we are lobbying members of the Lords around various amendments including Clause 9 which relates to the stripping of citizenship. We have held one protest outside parliament recently and we are mobilising for another protest to take place on Sunday 27th of February at 12 noon, assembling at the Home Office in Marsham Street, SW1P 4DF  and marching to Parliament Square.  Nearest tube stations are St James Park, Victoria and Westminster.

If you are able to, we would appreciate you joining us on the day.

2. We also encourage you to write to your local MP to ask them to take action against the bill when it comes back to the House of Commons. Plus your local councillors and candidates in forthcoming elections.

You can contact your local representatives via www.writetothem.com  which will  provide you will a template to write to your MP, Assembly members and local councillors and also provides details of how to write to a member of the House of Lords.

3. We are also supporting and speaking at a demo called by Another Europe Is Possible to coincide with the return from recess for parliament  on Monday 21st of February at 5.30pm, more details here: https://www.facebook.com/events/524500899048750

We are  co-signatories of a letter and petition led by After Exploitation which is in opposition to part 5 of the bill which seeks to reduce support for survivors of human trafficking and modern day slavery:

4. Join the e-action and right to your MP here using the template letter - you just need your postcode: http://afterexploitation.eaction.org.uk/scraptheplan

You can follow the campaign and keep up to date with action  as follows:

Together we can fight the attacks on our civil liberties and human rights proposed in this bill.

Thank you for your support.

National Chair, on behalf of: 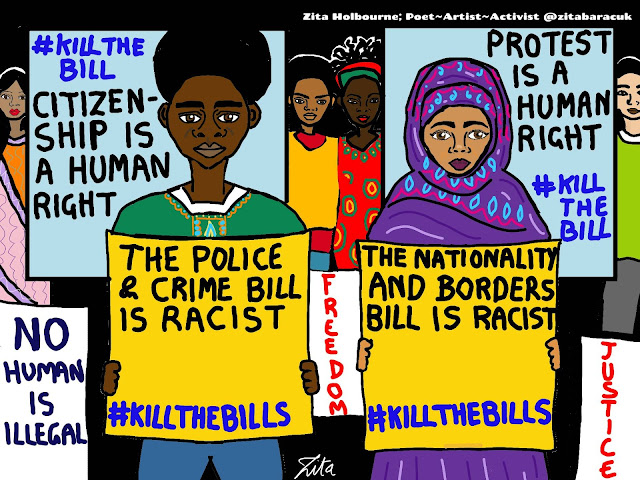