Armed Police Siege in Lambeth: Why We're Heading For Disaster.


Lambeth Police Service were involved in an 11 hours gun stand of in Dumbarton Road Lambeth on Sunday 19th December, just yards away from the Estate where Nathaniel Brophy was shot by police over a dispute about rent. Nathaniel was shot by police three times, once a in the back, after being seen brandishing a BB gun in August 2015.

That non-fatal shooting caused furore in the local community as the Lambeth Police Superintendent Richard Wood had failed to ensure to activate long-standing critical incident, community reassurance protocols, developed in partnership with communities over many years.

These were strategies and procedures that were developed as a result of many tragedies that have occurred in Lambeth over the last 40 years. These were the same strategies that were ditched in 2011 that led to the family of Mark Duggan and the entire Tottenham community being ignored and marginalised by the Metropolitan Police Service with such devastating and tragic consequences.

Incidents such as deaths in custody, racial murders, police brutality, racism and corruption, these strategies were all designed to avoid aggressive, racist policing and correct community misinformation that can lead to civil disorder in the aftermath of such events.

In the aftermath of the Brophy shooting, we saw what happened to the Mark Duggan family occur again as it became apparent that all important community/police protocols were ignored.

At this latest incident, one one from the community was contacted for advice by the Police or offered an all important scrutiny role to provide community reassurance.

In relation to the Brophy incident, last year, an interim statement from IPCC Commissioner was issued in the immediate aftermath by Jennifer Izekor said:

“I would like to reassure the community in Clapham and the wider public that the IPCC will be conducting a thorough and comprehensive investigation into the events surrounding the shooting. Our investigators have already gathered statements from officers involved, carried out house-to-house enquiries, trawled the local area for CCTV and will now being reviewing statements and video footage to establish the events of that day.

“The IPCC has engaged with key community members and is updating them on the progress of the investigation. We have also engaged with the injured man’s family and will continue to do so.”

That’s the last we heard anything about this case. There are no updates on the IPCC web site, despite the fact that the community demanded of  Lambeth Police and the IPCC that the Brophy incident be used as a ‘learning moment’ so as to ensure, that the potentially serious mistakes that were made could be avoided in the future.

Such is the disdain and contempt with which the Police and the IPCC views us, that both have failed to feedback any of the promised learning that they were so keen testify, was so important to them.

Despite their statements of commitment to ensuring community reassurance engagement and policies are implemented, all effective community communications in Lambeth have broken down.

This catastrophic failure, repeated across London, comes as a result of the closure of London’s borough based Police Consultative Group’s in 2015. As a result, decades of people’s blood, sweet and tears, tragic experiences fashioned into sensible pragmatic policies, demanded and fought for by communities, are now being routinely ignored by politicians and the police.

It’s a ticking time bomb and a scandal. If we believe in the principle of police by consent and working in partnership then were this must be evidenced on the ground, otherwise we are headed for a repeat of 2011.

This most recent armed policing stand off in Lambeth, once again sent alarm bells running and so I made some enquiries to see if the lessons explored with the non fatal shooting of Brophy and the commitments given by the IPCC had been followed up and implemented at this incident.

The answer was very disappointing. Not a single person or community rep was contacted by Lambeth police to provide advice and support, despite promises made in the aftermath of Duggan and Brophy shootings to improve community communications.

This degree of marginalization of both community and statutory partners by the police in Lambeth is quite profound.

I asked the new body that replaced the elected community accountable police consultative groups, the local unelected, meets behind closed doors with confidential minutes, Lambeth Safer Neighborhood Board  and asked if they had they been contacted in relation to this ‘armed police stand off. 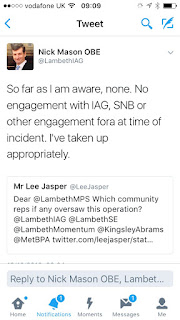 I spoke with the Chair of Lambeth Safer Neighborhood Board Nick Mason OBE, this was his response.

So there we have it, we have dozens of armed police in one of the most sensitive policing borough’s in London, doing what they please, how they like, with no accountability to Londoners.

I decided to speak to people in the local area where the gun siege took place. All said they had no idea what was going on and received no information from the police. They were informed about the incident by the press.

This is entirely unacceptable and Lambeth Police, Lambeth Council and the Mayor must answer the very serious charge, that the failure to maintain a culture of real police accountability to communities is a threat to public order and the maintence of the Queens peace.

In 2011 riots people tragically died. Getting this right can save peoples lives.

These community reassurance critical incident policies have been informed by decades of painful experience, millions of hours of community conversations and lots of tears.

This is far to important to be ignored until the fire next time.